Premier Stone Design is located just 5 miles away from Park Industries® facility, so it is easy to understand why they’ve been an all-Park shop since their beginning. Learn about the partnership they’ve formed in the Granite City (St. Cloud, MN, USA) and the results of major upgrades they’ve added to their shop.

2022 Video Update: Connor shares what the TITAN® CNC Router has meant for their shop.

In 2004, Tim Wendt started Premier Stone Design. He looked to his hometown manufacturer, Park Industries®, for his first saw and purchased a YUKON® Bridge Saw. Fast-forward to 2020 and his YUKON® table needs to be replaced after 16 years of hard work.

Tim’s son Connor is now running the shop, ready to bring a new mindset to their fabrication style. After a father / son (business) talk and some demos with their Park sales consultant Dale, Premier Stone Design decided to make the leap into digital fabrication instead of replacing the YUKON’s table.

Responding to the Market

A big factor in Premier Stone Design upgrading rather than just replacing, were changes in their market. There were two key factors – market demand and labor challenges.

Demand in their market was rising fast, especially that of Porcelain and other ultra-compact materials. Connor explains, “It’s definitely coming fast. We went from never doing porcelain to doing it all the time. The VOYAGER™ XP cuts porcelain extremely well, we wouldn’t of been able to capture that market without it.”

2021 Video Update: Connor dives into the results of the VOYAGER™ XP on their business.

The second reason was the change in the local workforce. With manual labor and skilled polishers being hard to find, Connor really likes how being digital will help them rely less on adding labor and increasing efficiency with what they have. It also opens their positions up to the younger generation.

Since adding their TITAN® 3700, they’ve been able to double their polishing production without needing extra labor. A surprise benefit of their two CNC machines for Premier Stone Design, is how they’ve been able to hire positions much easier and keep their shop crew happier. Connor explains, “They see the machines and they know we are serious. They know they won’t have to break their backs to keep up with the jobs coming in. All the guys in the shop absolutely love these machines.”

One fabricator at Premier Stone Design shared what it meant to him in a youtube comment, “I never imagined how these machines would not only increase the level of efficiency and productivity in the shop, but also alleviate some of the mental weight we in the shop carry, leading to a much healthier work and home environment mentally and physically. Connor spoke about our physical condition at the end of the day and I can attest to that. It’s refreshing to still have “gas in the tank” to go to the gym and exercise or play a game of pickup soccer after a hard days work. These wonderful machines have a played an important role in affording us those opportunities.”

Moving their polishing to the TITAN®

Connor answers few questions on how their new CNC router is working:

What has the TITAN® allowed your company to do?

“The TITAN® has allowed us to double our production without adding more hand polishers. We were doing around 100 sq ft a day before the TITAN®. Now we can do up to 250 sq ft a day and haven’t added any extra labor.”

How is the quality of polish on the TITAN® CNC Router?

“Throughout my time as a stone fabricator, I’ve done plenty of hand fabbing. I’ve definitely enjoyed taking advantage of the TITAN®. You set it up, walk away and come back to a perfect, install ready edge. There’s never pad marks or wavy rounds like you can see from a hand polish. Fast, hands-free polishing with exceptional quality – what more can you ask for.”

VOYAGER™ XP = a cut above

Connor responded to questions on how their new digital saw and imaging system are working out for their lean, three-man crew.

Why did you choose the VOYAGER™ XP?

“For us, it’s utilizing it as a two in one machine. I love the ability of the incremental router – we can cut every sink, radius, cooktop, faucet holes… everything on it. I can cut a whole kitchen in a half hour or less on the VOYAGER™ XP. The ultra-compact programming has helped a ton for porcelain and the miters come off great. What we were doing prior to the CNC saw to what we can produce with it now – the difference is astronomical. It’s a beast.”

On the TightCut™ Blade Plunge feature:

“We use the TightCut™ all the time. On every single program we do. It’s saved us on a lot of slabs. We can now do a job with one slab where before we may have had to order in two or three. It’s eliminated a huge cost for us helping us save big on material. It also saves the time needed to mill a square sink, by plunging the blade right up next to the corners.”

What would you tell someone who is still cutting manual and is looking at a VOYAGER™ XP?

“The VOYAGER™ XP is a great machine. If you want to make that digital leap, this is the machine to get your foot in the door. It’s super easy to learn and operate. If you want to grow your business… this machine is the future.”

With Premier Stone Design being in such close proximity with Park Industries®, Connor reflects on their partnership,

“It’s pretty cool being so close to Park. We sometimes take it for granted, having an industry-leader in our backyard. It’s awesome because I feel our partnership is much more personable.”

In regard to the VOYAGER™ XP & TITAN®,

“The service has been awesome… I think I know at least three service reps on a first-name basis because I’ve had so many questions on the new machine. I wanted to make sure I knew it inside and out, and they’ve been so helpful. Any question I had with the VOYAGER™ XP to TITAN® to Alphacam, they’ve been right there for me.”

He concludes, “Ever since we started, we’ve had Park Industries® machines and we wouldn’t ever go anywhere else.” 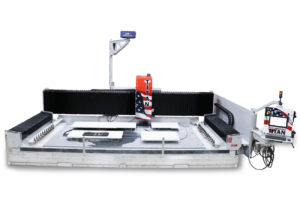